Extended Abstract
Introduction
Among climatic elements, temperature measurement is essential. Analysis of temperature changes can reveal the climatic realities of any region. Due to Iran's location in the subtropical region, severe temperature changes are its inherent features, so it is necessary to predict and monitor air temperature. Temperature fluctuations on a global scale are somewhat affected by Tele-connections. Tele-connections are intermittent anomalies that affect atmospheric patterns on a planetary scale and have an extended return period. Southern Oscillation is one of the leading indicators of global climate variability on an annual time scale and affects the Iranian climate by changing pressure patterns. The North Atlantic Oscillation (NAO) is the most prominent pattern of Tele-connections in the Northern Hemisphere, indicating the pressure difference between the northern latitudes (Iceland region) and the temperate latitudes (Azores region). Arctic Oscillation is the first active Tele-connection pattern in the subtropical region mid-winter. The Earth's climate is not constant and environmental changes can result from changing climate systems. The behavior of a climatic pattern in each region is associated with Tele-connection patterns. The main purpose of this study was to determine the role of simultaneous occurrence between NAO and AO Tele-connections with SOI on winter temperature in Iran.

Methodology
In this study, the average monthly temperature data of 100 selected stations in Iran from the Islamic Republic of Iran Meteorological Organization (IRIMO), and Tele-connection indices including MEI, NAO and AO from the National-Oceanic and Atmospheric Administration (NOAA) for the thirty-year statistical period (2019-1988) were received and used as baseline data. First, all data were sorted by climatic seasons (December-January and February). Monthly normalized data were entered into STATISTICA software as the dependent variable, and Tele-connection data were entered as the independent variable to determine Pearson correlation coefficients. Since the main purpose of this study was to investigate the simultaneous effect of North Atlantic Oscillation and Arctic Oscillation with Enso Tele-connection, the positive and negative phases of the mentioned Tele-connection were identified. Thus, numbers smaller than -0.5 negative phase, between -0.5 to 0.5 neutral phase, and greater than 0.5 positive phase were considered. In the next step, the monthly temperature anomalies for the mentioned months were calculated, and the distribution of its anomalous changes in GIS software was zoned by the Inverse distance weighting (IDW) method. According to the results of correlation coefficients and the results observed in temperature anomaly maps, diagrams of the trend of changes in Tele-connection indices compared with the anomalies of changes in the average temperature of the studied stations were drawn. The results indicated that the simultaneous occurrence of the La-Nina phenomenon with the positive phases of the northern hemispheres provides the conditions for the intensification and development of cold in Iran, especially during January and February, and it is almost unlikely to expect a warm winter in this case. Comparing the trend of changes in Iran's average winter temperature with the trend of changes in North Atlantic Oscillation, Arctic Oscillation and Enso multivariate index in December, January, and February showed that in recent years, the average temperature change in December remained constant, but in January and February has been increasing for a variety of reasons, including climate change, climate change patterns, and teleportation. The gradual decrease of the North Atlantic oscillation indices, especially the Arctic oscillation, during January and February coincided with the increase in temperature, so the average temperature of Iran was normal and more than expected during the simultaneous occurrence of the negative phases of the North Atlantic oscillation indices.

Results and Discussion
This study's results showed a significant inverse relationship between NAO and AO Tele-connections with temperature in the northern and western parts of Iran, especially in February and January. The highest correlation between temperature and AO index was observed in Tabriz station (up to -0.66). However, no significant relationship was observed between the MEI index and temperature in most regions of Iran (except the southern strip). The critical result of this study is to reveal the role of separate phases of northern Tele-connections on winter temperature changes in Iran. The results showed that the positive phases of AO and NAO reduce the temperature of the northern and western parts of Iran. During severe positive phases of AO and NAO, the temperature anomalies of most parts of Iran change below normal. The results also showed that warm winters are associated with negative phases of northern indices in the under-study period. Also, the simultaneous occurrence of La-Nina and El-Nino phenomena with positive and negative phases of NAO and AO causes temperatures below or above normal in most central and southern regions of Iran. The simultaneous occurrence of El-Nino and La-Nina phenomena with neutral phases of North Atlantic oscillation and Arctic oscillation moderates the temperature of Iran and reduces the possibility of widespread and severe positive and negative anomalies. The occurrence of El-Nino phenomenon with neutral phases of NAO and AO has caused the occurrence of normal and higher-than-normal temperatures in the eastern and southeastern half of Iran. The results also showed that the La-Nina phenomenon with neutral phases of NAO and AO causes normal and higher than normal temperatures in the western half, especially in the northwestern regions. 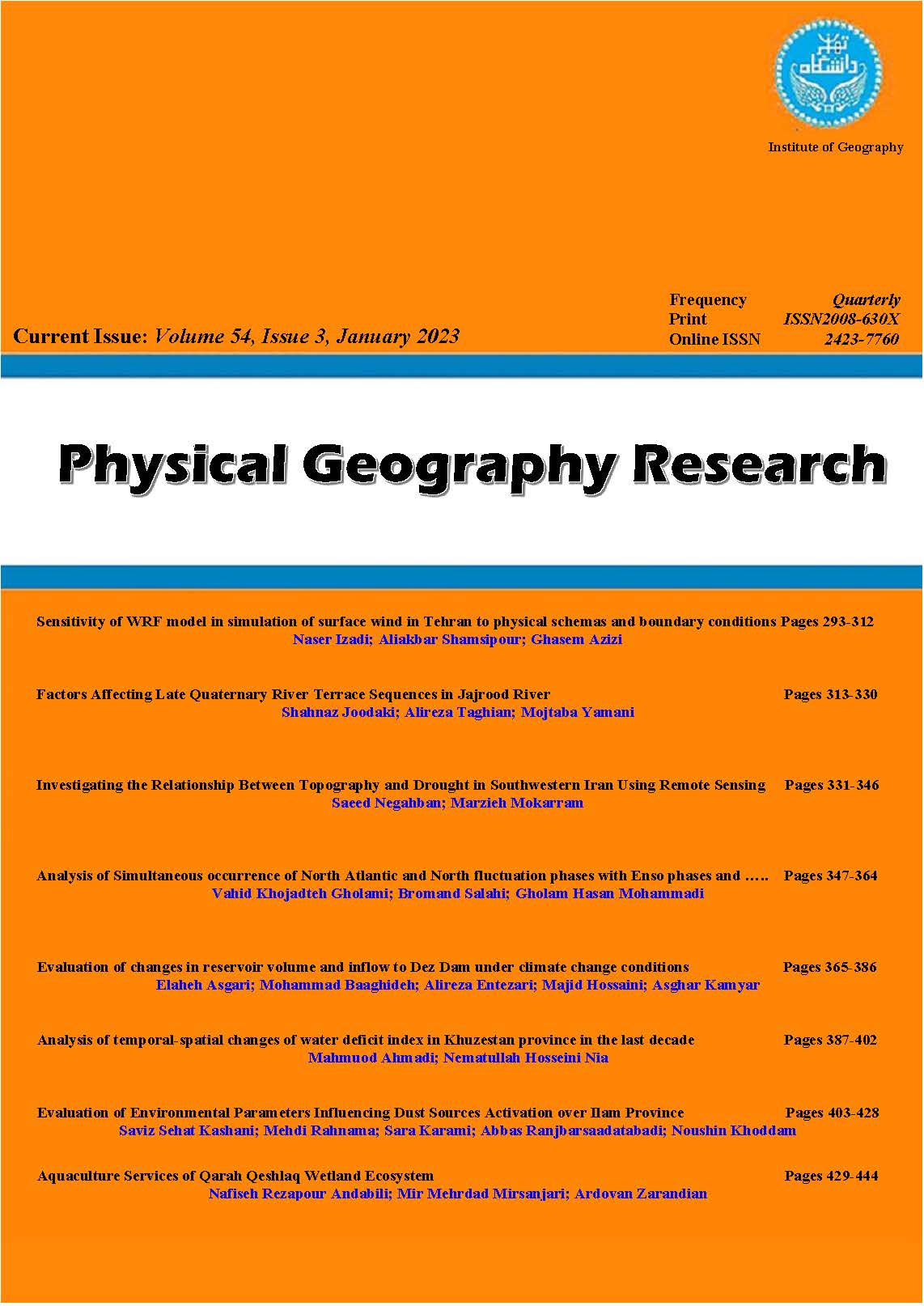