Methodology
The present study investigates the recognition of prevailing atmospheric patterns during precipitation and Widespread thunderstorms in northwestern Iran. To conduct this research, first rainfall and thunderstorm data were received daily from 18 synoptic stations with a common statistical period of 20 years (1993-1992) from the Meteorological Organization. Then, to determine the selected days, the days that were reported in 5 stations and more rain and thunderstorms were selected. Then 108 days were selected by principal component analysis (PCA). Six components out of the total components that explain more than 73% of the total variance were selected for the next analysis. Then, using Euclidean distance and ward’s method, a cluster analysis on the matrix, Factor scores were performed. Then the clustering tree was drawn and the observations were divided into 5 clusters. To analyze the atmosphere in the obtained patterns, re-analyzed data were prepared with a resolution of 2.5 * 2.5 degrees from the National Center for Environmental Prediction and Atmospheric Research, USA (NCEP / NCAR). Using these data, synoptic maps in each pattern were drawn and analyzed.

Results and discussion
Investigations showed no compression patterns with Widespread thunderstorms in March. Because this month has winter features, extensive local climbs are less common this month. Therefore, Widespread thunderstorms in this month and other cold months of the year are considered a random phenomenon. It can also be said that hot and cold fronts can not create Widespread thunderstorms without local thermal rise. In other words, in summer due to lack of sufficient humidity and in cold seasons due to lack of surface heating we do not see the occurrence of Widespread thunderstorms.
At the time of the occurrence of rains and Widespread thunderstorms in northwestern Iran, It is often located at the 500 hpa level of Trough in central Iraq to the eastern Mediterranean. Differences in the location, depth and extent of this trough have caused the patterns to differ from each other, resulting in differences in the occurrence of atmospheric events in the study area. In this study, pattern three had the highest number of events compared to the 5 extracted patterns. Patterns that are limited to April and the cold days of May are more widespread. Also, patterns that occur limited to June and hot days in May are less widespread. In the Deep trough and minor Trough pattern, the precipitation is mostly influenced by local moisture sources and moisture sources close to the study area (such as the Caspian Sea). Also, in these patterns, the sources of moisture in the lower levels of the atmosphere play a greater role in the occurrence of precipitation. At the time of the Deep Trough and Minor Trough patterns, it is the combination of western systems with local ascent that creates Widespread precipitation. These patterns are limited to May and June. During these months, the ground receives the energy it needs to climb locally. The integration of the local ascent with the western system strengthens it and creates Widespread thunderstorms and rainstorms.
In patterns closed low, blocking , the Eastern Mediterranean Trough, the Red Sea and the Mediterranean Sea are the most important sources of moisture, respectively. In the mentioned patterns, moisture sources at the levels of 700 and 500 hPa play the most important role in creating Widespread precipitation. During the occurrence of closed low, blocking and trough patterns in the eastern Mediterranean, the surface temperature decreases and the role of western systems becomes more prominent. From pattern one to pattern five, the surface temperature decreases, respectively. In the Deep Trough and Minor Trough patterns, the study area experiences a temperature of 295 degrees Kelvin. In the closed low pattern, a temperature of 287 degrees Kelvin is observed in the northern half of the study area; But in the blocking pattern, the temperature of 287 is transferred to the more southern parts. In the Trough pattern of the eastern Mediterranean, the temperature of 283 degrees Kelvin is seen in the northern parts of the study area. In other words, from model one to five in the study area, the surface temperature decreases and from one model to another, the surface temperature decreases. As a result, with decreasing temperature, the effect of local ascent compared to the first and second patterns has decreased and it can be said that a significant part of thunderstorms in addition to local ascent, is affected by the front systems passing through northwestern Iran; But fronts alone cannot create widespread thunderstorms without integrating with local thermal rise.

Conclusion
The result was that the closed low pattern had the highest and the Deep trough pattern had the lowest repetition. Deep trough and minor trough patterns have less geographical extent than other patterns. When occur patterns closed low, blocking and trough eastern Mediterranean, the study area experiences a lower surface temperature. Also, precipitation is more extensive in these patterns and the maximum vertical air flow is observed at the level of 700 and 500 hPa. Widespread thunderstorms are more likely to occur in the spring. In winter, due to the lack of surface heating, we do not see Widespread storms. In hot seasons, too, Widespread thunderstorms cannot occur due to lack of moisture. In other words, Widespread thunderstorms in northwestern Iran occur when a local ascent is combined with a dynamic ascent resulting from the passage of a low-pressure system through the study area. 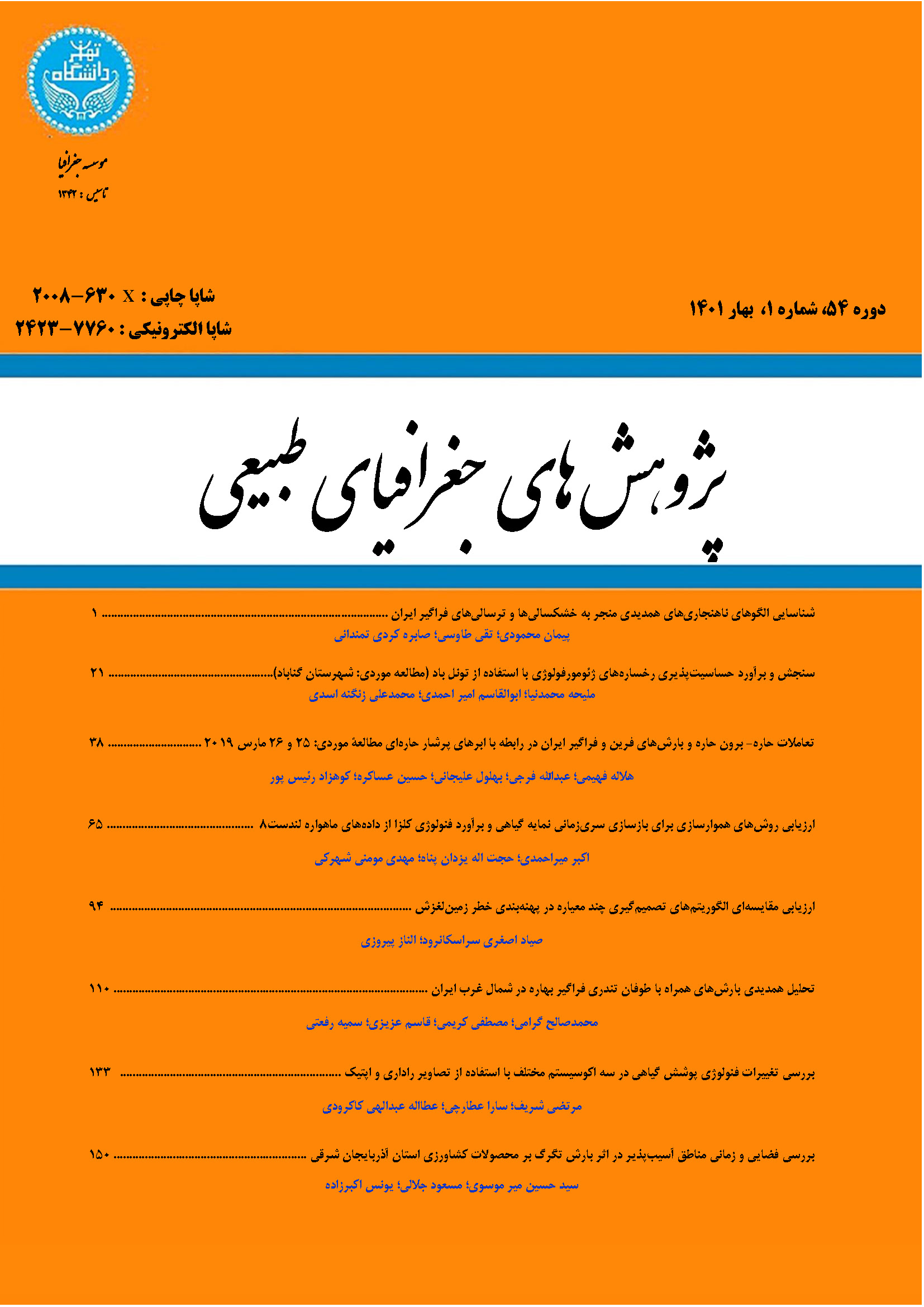