Extended Abstract
Introduction
Worries about how to plan and exploit water resources in confronting new conditions have increased as evidence of climate change becomes more apparent. This issue has led a significant portion of recent meteorological research to examine climate change's consequences on water resources. One of the most important developments is the change in the inflows to the dam's reservoirs. The Dez Dam was built over the Dez river and is located in southwestern Iran, within 23 kilometers of distance from Andimeshk. Its maximum capacity is 3.3 billion m3. As one of the most important water supply sources in the agricultural and electric energy sector of Khuzestan province, this dam has faced severe droughts in recent years, and the flow to the reservoir has been decreasing. The purpose of this study is to evaluate the amount of inflow and reservoir volume of the dam under the conditions of climate change.

Materials and methods
To simulate basin temperature and precipitation, the accuracy of 17 Regional Climate Models of the CORDEX - WAS project (South Asia) was evaluated based on the skill score (SS). Then, a combination of ten with the lowest skill score was used to simulate the climatic parameters of temperature and precipitation for future periods. Also, the bias correction of simulated monthly precipitation and temperature data in the historical period and then the future period was done in each station and for each parameter using the change factor method. Simulations of these parameters were conducted for three 20-year periods 2020s (2020-2039), 2050s (2050-2069), and 2080s (2080-2099) under the RCP4.5 and RCP8.5 scenarios for selected stations. In this research, the SWAT semi-distributed hydrological and MODSIM models was used to simulate the inflow and reservoir volume, respectively.

Results and Discussion
The results of the downscale of the selected models and climatic scenarios indicate an increase in minimum and maximum temperatures in all months of the year and decreased average rainfall in the future. Predictions considered the range of minimum and maximum temperature increase under selected models in the RCP4.5 scenario from 1.5 - 4.2 ° C and 1.5 - 3 ° C, respectively, and in the RCP8.5 scenario from 2.7 - 5.3 ° C, and 1.6 - 5.8 ° C probable. The models also predicted the range of precipitation change to be 11 up 17% under the RCP4.5 scenario and 8 to 18% under the RCP8.5 scenario. After ensuring the hydrological model's accuracy and the general circulation models (RCM) output, the SWAT model was implemented under different scenarios. The outflows indicate a significant reduction in the flow of the Dez River in the future. The reduction rate can be between 49 and 52% in the RCP4.5 scenario and the RCP8.5 scenario was more, especially in the last decade of the 21st century, about 44 to 64%. The highest decrease will occur in the colder months of the year. In other words, the inflow decreases in December and even further decreases in April and March. One of the main reasons for the decrease in the volume of flow in the region in these months (March, April, and May) is changes in the precipitation pattern, in addition to the decrease in precipitation. In other words, in these months, the water of snow melting is associated with an increase in the river's discharge in the current climate, but such conditions will change in the future. The decrease in the flow rate entering the dam has caused a decrease in the reservoir volume of the dam, and its volume has decreased under RCP4.5 and RCP8.5 release scenarios. In the RCP4.5 scenario, the average annual volume of the reservoir will reach 1184.4, 1179.8, and 1138.8 billion m3 for the three decades of 2020-2039, 2050-2069, and 2080-2099, respectively. In the RCP8.5 scenario, this average value equals 1293.8, 1070.4, and 1008.9 billion m3, respectively. Therefore, under the two selected scenarios, the reservoir volume was reduced between 47 to 50% for the future decades. This significant decrease in volume in the future decades, which has affected the volume of water discharge of the dam, that is indicate Dez Dam will face significant challenges in come cross  with downstream needs (environmental needs, agriculture, drinking, industry, and electric energy).

Conclusion
This study evaluated the effect of climate change on the amount of inflow and the reservoir volume of Dez Dam under two climate scenarios. Using the semi-distributed SWAT model, the water flow simulation to the dam is done. After evaluating the model and calibrating and validating the parameters of the hydrological model, by entering the future precipitation and temperature data into the calibrated SWAT model, the flow was simulated for the three future periods under the above scenarios. The results of the climate models illustrated that the average minimum and maximum annual temperature would have increased by 3 and 3.5 degrees Celsius, respectively, for the future decades. The average annual precipitation for the study area will have decreased by 14%. The prediction of the inflow to the dam by the SWAT model under two scenarios indicate a significant decrease in the discharge of the Dez River in the future; The amount of this decrease in the RCP4.5 scenario will be between 49 to 52%, and in the RCP8.5 scenario and especially in the last decade of the 21st century, it will be more and around 44 to 64%. The decrease in the flow rate entering the dam has caused a decrease in the volume of the reservoir of the dam, and its volume will have decreased between 47 and 54 percent under the two selected scenarios for the future decades. In general, the results obtained from this study indicate that this region will move towards a climate with lower humidity and higher temperature in the future decades. This situation will increase the shortage of water resources in the basin and will intensify the water crisis in the downstream areas. Therefore, it seems that the water resources management in this basin requires a review for its sustainable development and exploitation. Since, the flow rate of Dez in the future decades will significantly decrease due to, the expected of the climate changes, the Dez dam's primary goals to meet the needs of agriculture, electricity, drinking, etc. will have face significant shortages. It is recommended to implement the policy of reducing demand, changing the cultivation pattern, recommending and developing the cultivation of low water-demanding plants, using new irrigation methods, and using unconventional waters. 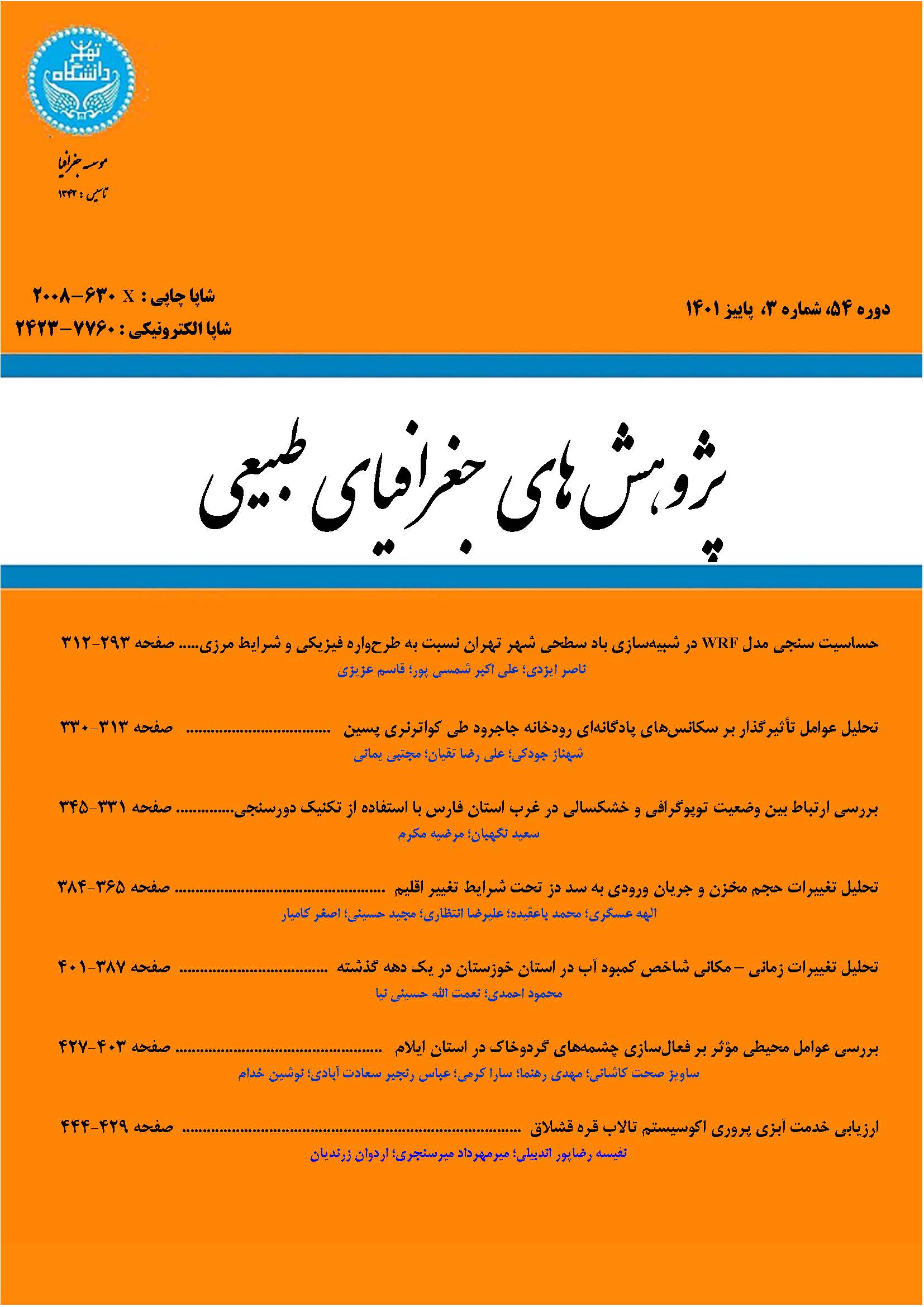